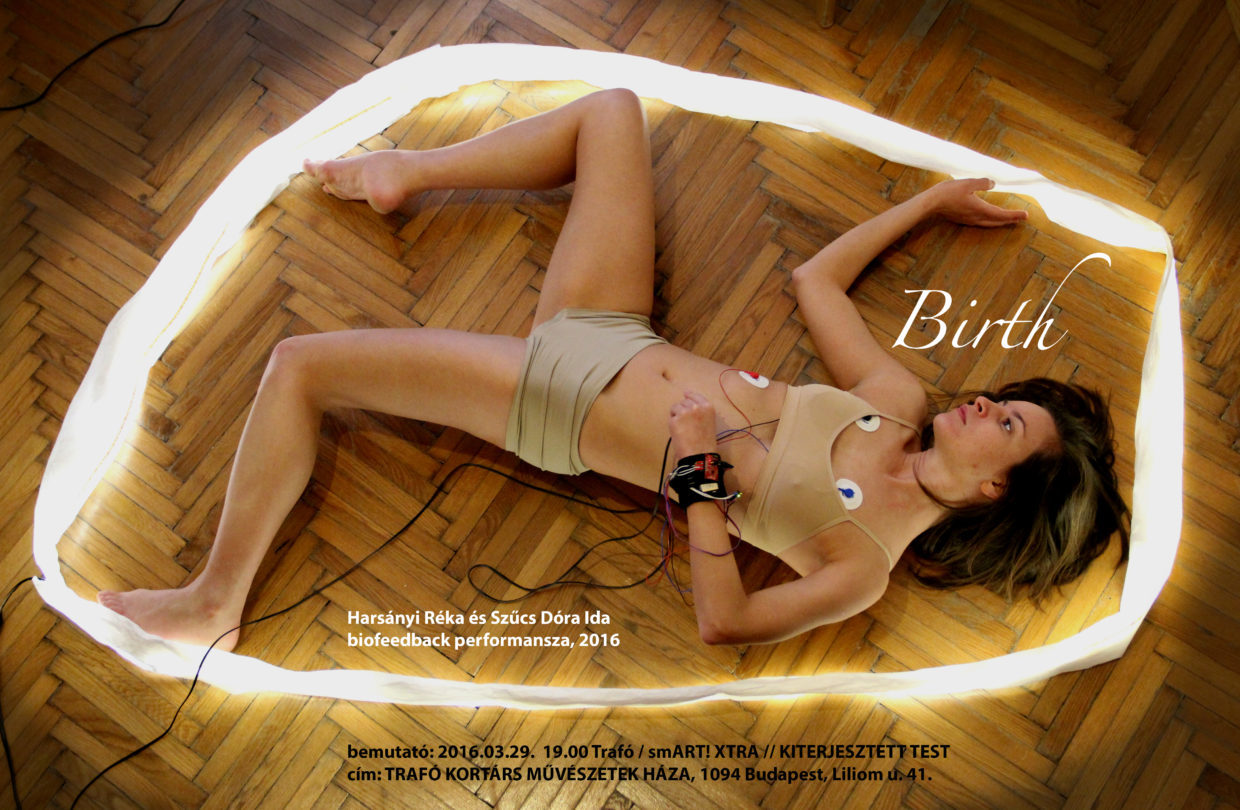 Our biofeedback based audiovisual performance, called Birth, is about an unseenstory. This artwork converge with experiment, using technology to creatively reinterpret the imperceptible of the unseen life, inside a human body through biological processes. The ECG and Pulse sensors attached to the dancer’s body measure not only the heartbeat of her, but also the movements of her certain muscles like arm and chest. These data are controlling the pulse of the LEDstrip around her in real-time. As a result this light-uterus behaves as a living organism, in harmony with its inhabitants, until its creatures leave it. However, as she becomes more familiar with her environment and herself, she increasingly desires for new stimuli. While she provokes those stimuli, she recognises the sounds of her organs and the limitations of her body and surroundings from which she wanted to brake out, so that later she may be beginning the process again on the other side.

During the rehearsal we have found the novel I Gave Up Before Birth by Samuel Beckett. It made a deep impact on us. Its complexity symbolises our thoughts about being inside, or being alive as a human.

“I gave up before birth, it is not possibleotherwise, but birth there had to be, it was he,I was inside, that’s how I see it, it was he whowailed, he who saw the light, I didn’t wail, Ididn’t see the light, it’s impossible I shouldhave a voice, impossible I should havethoughts, and I speak and think, I do theimpossible, it is not possible otherwise, it washe who had a life, I didn’t have a life, a life notworth having, because of me, he’ll do himselfto death, because of me, I’ll tell the tale, thetale of his death, the end of his life and hisdeath, his death alone would not be enough,not enough for me, if he rattles it’s he who willrattle, I won’t rattle, he who will die, perhapsthey will bury him, if they find him, I’ll beinside, he’ll rot, I won’t rot, there will benothing of him left but bones, I’ll be inside,nothing left but dust, I’ll be inside, it is notpossible otherwise, that’s how I see it, the endof his life and his death, how he will go aboutit, go about coming to an end, it’s impossible Ishould know, I’ll know, step by step, impossible I should tell, I’ll tell, in the present, therewill be no more talk of me, only of him, of theend of his life and his death, of his burial ifthey find him, that will be the end, I won’t goon about worms, about bones and dust, no onecares about them, unless I’m bored in his dust,that would surprise me, as stiff as I was in hisflesh, here long silence, perhaps he’ll drown,he always wanted to drown, he didn’t wantthem to find him, he can’t want now any more,but he used to want to drown, he usen’t towant them to find him, deep water and amillstone, urge spent like all the others, butwhy one day to the left, to the left and notelsewhither, here long silence, there will be nomore L he’ll never say I any more, he’ll neversay anything any more, he won’t talk toanyone, no one will talk to him, he won’t talkto himself, he won’t think any more, he’ll goon, I’ll be inside, he’ll come to a place anddrop, why there and not elsewhere, drop andsleep, badly because of me, he’ll get up and goon, badly because of me, he can’t stay still anymore, because of me, he can’t go on any more,because of me, there’s nothing left in his head,I’ll feed it all it needs.”
SAMUEL BECKETT

Stunning Biofeedback Performance Returns a Dancer to the Womb